This is a guest post from acclaimed wildlife photographer, adventurer, and philosopher Caroline Gibello.  Her wildlife photographs evoke the soft and ethereal qualities reflected in her writing.  This is one of our favorite written pieces by Gibello – a retrospective on the metaphors of the wildebeest migration vs. human fear.

Herd mentality: the tendency for people’s behaviour or beliefs to conform to those of the group to which they belong….

2 million wildebeest migrate annually from the Serengeti to the southern Masai Mara driven by an instinctual urge to survive, to seek greener pastures to graze, which cyclically appear with the rains. Crossing crocodile infested rivers along the way they are confronted with a primal, instinctual feeling we commonly refer to as fear.

I have watched thousand-strong masses of gnus tentatively hover around the river banks for days, gripped by a blanket of uncertainty and fear, waiting tentatively for the brave leader to take the first plunge, to summon the courage to leap in to the water and initiate the perilous dash across the waterway that may cost them their life, to predators or fatal injury. You can smell the fear in the air – it is palpable. To witness the onslaught of the masses finally thronging through the water is a spectacle to behold., one which I wish everyone could witness.

Fear at its very base, when totally whittled down, is fear of death or ‘a dying’. Something in your life is threatened, compromised or questioned and the uneasy feeling  that arises is borne from the fear of death of a status quo as you know and experience it, the dying of something familiar, and an attachment to that notion, experience or physical ‘thing’. In its most extreme context of course it is the fear of loss of mind identity in the form of this life experience you are having as a human being – death of this physical form your mind identifies with.

The fear that has swept through the planet as a result of covid19 is ultimately founded on man’s fear of death and dying and the question of mortality that each and every living creature will confront during this brief sojourn on planet earth. Sometimes life evaporates or is extinguished, unexpectedly, other times it is a slow and conscious process. Who chooses that for anyone I do not know.

On the flip side to the coin of fear, is love, hope and life. The wildebeest standing on the river bank don’t in fact have a choice as to whether they should cross the river or not. In front of them is a crocodile infested river, on the other side is no grazing and food source which will amount to imminent starvation. Overcoming fear to sustain their life is what the collective herd mentality finally drives home, and the swathe of hope initiated by a few key herd members overrides individual fear in a monumental wave.

Translate this all to the human herd and the key notion of Fear versus Love. In the face of this human tidal wave of fear, fear of dying, of loss of identity, of attachment to a status quo, imagine the possibilities of what a collective tidal wave of love could transmute, heal, restore and create in the context of crossing the river to a land of greener pastures.

You’re standing on the edge of the river, in front of you and behind you there is fear, fear of death from a virus, of a collapsed economy, of an uncertain future, but behind you there is death too, a compromised and dying mother earth, unsustainable ways of living and surviving on this planet and a collapsing paradigm of existence.

The only way forward is to choose Love. Like the wildebeest at the edge of the river, take a leap of faith in your actions. Make new choices that are founded in acts of loving kindness……and allow the new, fresh green grass to flourish beneath your feet. That way there will be no crocodile infested rivers to cross, no greener pastures to seek out….. 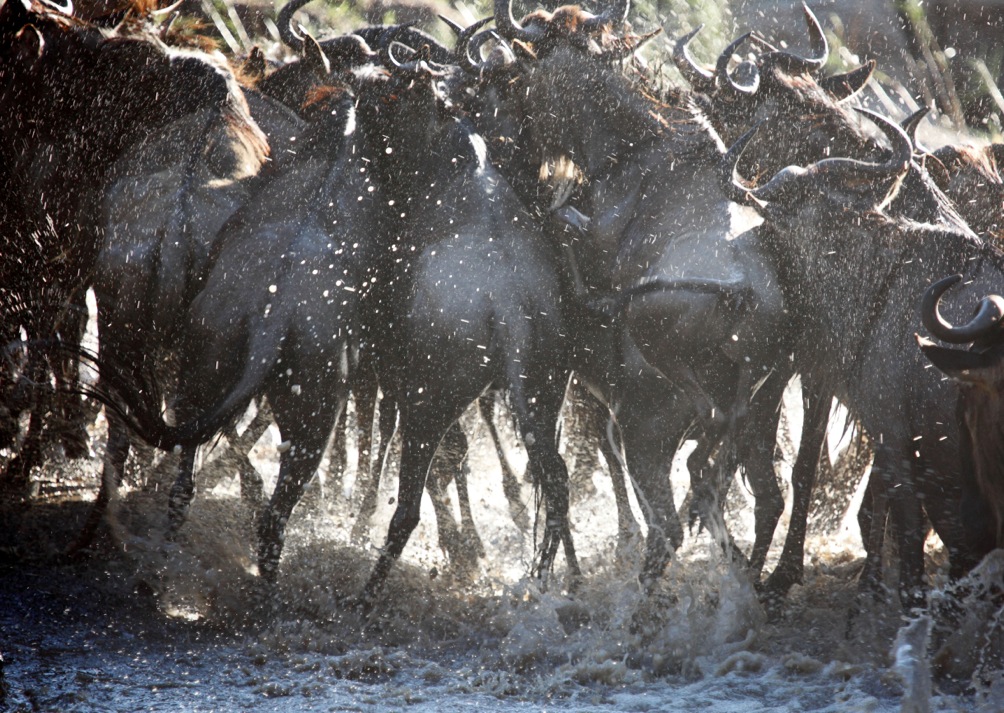 The full collection of fine art photographs by Caroline Gibello can be found by clicking on the following link!